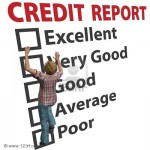 There are multiple credit scores out there, but the most common is your FICO score, which ranges from 300 to 850.  A score of 760 or above is considered excellent and will land you the top deals available, while a 700 to 760 is strong but may not qualify you for the best rates, says John Ulzheimer, president of consumer education at SmartCredit.com.

Not only is it used to determine whether you’re creditworthy enough to open a credit card, land a mortgage, rent an apartment or get an auto loan, but it also plays a big factor in the interest rate you qualify for.

To avoid this bottom rung, steer clear of these common credit mistakes:

Carrying big balances: Running up piles of debt is never a good idea. Keeping a big balance on a credit card can increase your credit utilization ratio, which is the percentage of your credit limit that you use. Together with other measurements of your overall debt, this ratio accounts for about 30% of your credit score.

The ratio is calculated using the end-of-month balance that appears on your bill, meaning that your score can suffer even if you pay off your balance every month. To keep your debt utilization ratio in check, Bill Hardekopf, president of LowCards.com, recommends using less than a third of your credit limit.

Closing credit cards: It may seem like the responsible thing to do, but closing a credit card account can actually hurt your credit.

That’s because it lowers the amount of credit you have available to you — which can then hurt your debt utilization ratio (unless you don’t carry any balance on your credit card).

The length of your credit history is also factored into your credit score, so keeping a credit card open also helps with that.

“Keep it open and charge a sandwich once a month just to have activity, and then pay it off each month,” said Hardekopf.

But if it’s just too tempting to have so many credit cards in your wallet, get rid of the one with the lowest credit limit, Ulzheimer recommends.

Paying late: Your payment history is one of the biggest factors lenders look at and makes up approximately 35% of your FICO score — so late payments on credit cards, student loans, mortgages or even doctor’s bills can all bring down your score if the company reports it to the credit bureaus.

“One or two isn’t going to be significant but if it’s habitual it’s going to hurt you,” said Richard Barrington, senior financial analyst at MoneyRates.

Defaulting: The most obvious credit no-no is defaulting on a loan or credit card, which means you fail to pay back the amount owed to a lender. The biggest hits come from declaring bankruptcy or foreclosing on a home, which can easily slice 100 points or more from a credit score.

“Anything that can be classified as defaults on obligations are the bombshells that are going to leave a giant smoking crater on your credit,” said Barrington.

Opening too many credit lines: While having some credit is good for your score, there is such a thing as too much.

Each time you apply for a loan or credit card, the lender makes an inquiry into your credit history, which usually knocks off several points from your credit score.

Applying for multiple credit cards or loans or increasing your overall available credit can also be a red flag.

“If you’re continually adding to your potential credit, credit companies are going to look at that as a risk that you could become overextended at some point,” said Barrington. “So, if you’re one of those people who can’t say no when a credit card offer arrives in the mail, this could drag down your credit [score].”

Not having a credit card: A growing number of Americans are ditching credit cards as they turn to debit and prepaid cards instead. But while this may keep you safe from debt, it’s not going to help your credit score.

Without any credit history, you’re typically considered unscoreable, meaning there isn’t enough activity on your credit file to calculate a score. This leads many lenders to deem you too risky to take a chance on, said Ulzheimer.

“It’s like walking into a job interview with an empty resume,” said Ulzheimer. “[A lender] would have to roll the dice on you to give you credit — and that’s not a good position for you to be in.”

It also hurts the diversity of your credit file, which accounts for 10% of your score and rewards you for having experience managing different kinds of credit — like credit cards, mortgages and auto loans.

Co-signing: It’s tempting to help out a friend or relative by co-signing a loan when they can’t qualify on their own. But it’s a huge risk to take, and it can often result in ravaged credit.

By becoming a co-signer, you’re assuming equal responsibility for the amount owed, meaning any late payments or defaults will show up on your credit report and your score will suffer accordingly. You could also end up facing collection action or even lawsuits.

We use cookies on our website to give you the most relevant experience by remembering your preferences and repeat visits. By clicking “Accept”, you consent to the use of ALL the cookies.
Cookie settingsACCEPT
Manage consent

This website uses cookies to improve your experience while you navigate through the website. Out of these, the cookies that are categorized as necessary are stored on your browser as they are essential for the working of basic functionalities of the website. We also use third-party cookies that help us analyze and understand how you use this website. These cookies will be stored in your browser only with your consent. You also have the option to opt-out of these cookies. But opting out of some of these cookies may affect your browsing experience.
Necessary Always Enabled

Performance cookies are used to understand and analyze the key performance indexes of the website which helps in delivering a better user experience for the visitors.

Analytical cookies are used to understand how visitors interact with the website. These cookies help provide information on metrics the number of visitors, bounce rate, traffic source, etc.

Advertisement cookies are used to provide visitors with relevant ads and marketing campaigns. These cookies track visitors across websites and collect information to provide customized ads.

Other uncategorized cookies are those that are being analyzed and have not been classified into a category as yet.